Communications Officer Sophie's bee houses and wildlife pond have been a hive of activity so far this spring..

To say the least, this spring has been an unusual one so far. With so many of us in lockdown and working from home, gardens have become a huge lifeline and connection to nature. I have been trying to get outside for lunch every day, and where I sit on the lawn with the sun on my back (weather allowing) happens to face the bit of fence where I've mounted my bee houses. And boy, are my bee houses busy!

Mounted last year, my houses were already pretty full and plugged with soil and leaves by the various species of mason, mining and leafcutter bees I had noticed last spring and summer. This year, perhaps because I'm watching more often, I seem to have more than ever, and of various species I'm yet to identify (they just don't stay still!), and I've had to order a new bee house to make sure I have space for everyone as the season goes on.

It's been fascinating watching them buzzing around each other, avoiding the spider's webs, fighting intruders out of their holes, delivering pollen and building the cells for their eggs. But the most exciting thing has been how the bees are using my new pond.

Built over the autumn, this is the first spring that my pond has been in action. Following advice from the brilliant Butterfly Brothers at an event I was at at last year's Birdfair (as well as some of the really great advice from the Wild About Gardens pond booklet and Jules Howard's new book), I have made my pond as wildlife friendly as possible. A big part of this has been lining it with pond liner and then replacing some of the subsoil that was excavated from the hole on top, rather than just leaving the plastic showing. Plants are then planted straight into the soil, making it look much more like a natural pond, and allowing them to spread and grow.

After a few teething problems with the mud leeching all the water out of the pond (solved by making sure there's a gap between the mud from the pond and the mud in the rest of the garden), I am so delighted that this has meant there is plenty of wet mud for the bees to use, and have spent many a sunny half hour watching them come and go with mouthfuls of mud, and then building their cells in the bee houses.

My next task is to try and start identifying them, as I am sure I have seen at least three different species so far, including the tawny mining bee and the red mason bee (not to mention the holes appearing in my lawn!) Perhaps then I can start recording my sightings - a big step for a novice like me!

This is something we can all try to do more of, though, and if you want any help yourself you can join our friendly Monitoring & Research team over at their #wildlifefromhome Facebook group, and read Ryan Clark's brilliant collection of blogs about wildlife recording and how to get started. 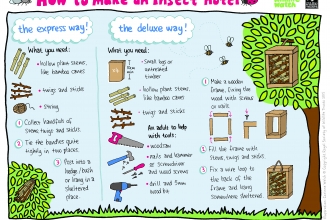 Build your own insect hotel

Solitary bees are brilliant garden guests, as pollinators and as handsome insects! Build your own bee house to attract them. 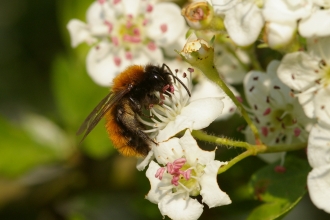 The Tawny mining bee is a furry, gingery bee that can often be seen in parks and gardens during the springtime. Look for a volcano-like… 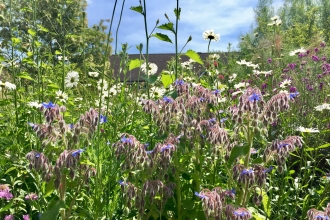 Take action for wildlife at home by turning your garden into a wildlife haven.

Insects are vital to life on earth. But they need our help now. They’re in trouble but you can make a difference.