The People's Walk for Wildlife weaves through London with birdsong as an accompaniment. Photo by Sophie Baker

A report from the People's Walk for Wildlife arranged by Chris Packham where 10,000 people marched on Westminster to demand a Wilder Britain. 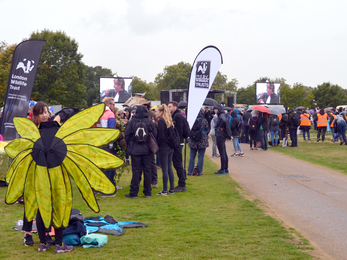 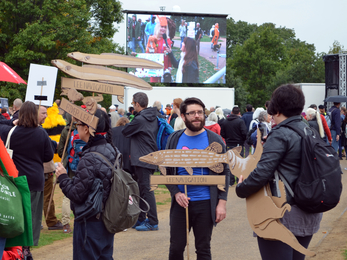 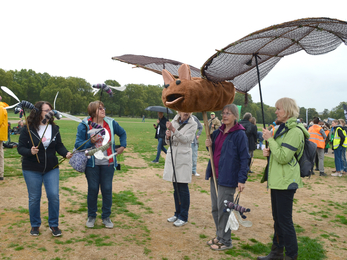 A magnificent bat at the People's Walk for Wildlife 22 Sep 2018. Photo by Sophie Baker. 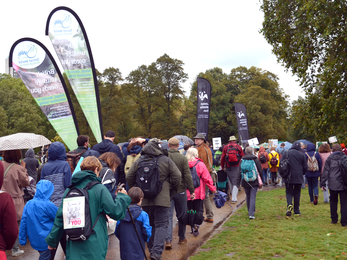 The People's Walk for Wildlife sets out from Hyde Park 22 Sep 2018. Photo by Sophie Baker. 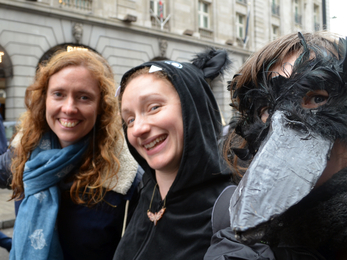 A raven, a bat and a wildlife ally on the People's Walk for Wildlife 22 Sep 2018. Photo by Sophie Baker. 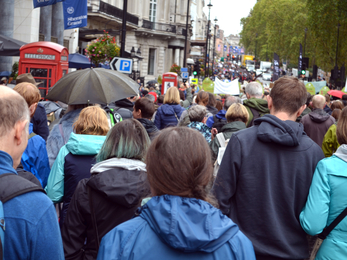 The People's Walk for Wildlife weaves through London with birdsong as an accompaniment. Photo by Sophie Baker

The People's Walk for Wildlife on 22 September saw over 10,000 people - and I was proud to be one of them! -  gathered in Hyde Park to protest at the decline of wildlife in our country and set out their demands for a Wilder Britain. Organised by Chris Packham, and with support onstage from a wide range of speakers and passionate wildlife advocates including George Monbiot, Kate Bradbury, Tony Juniper, Bella Lack, Billy Bragg, Robert MacFarlane and more, talking about everything from urban wildlife to bird of prey persecution to the recovery of our uplands to diversity and representation of minorities in the movement - the event sent a powerful message.

A couple of days before, Chris and a large group of authors and experts published a People's Manifesto for Wildlife, and a copy of this document - which sets out 200 actions to help reverse the decline of the wildlife in the UK - was delivered by hand to 10 Downing Street by a group of passionate and dedicated young people.

It felt empowering to be part of this colourful, peaceful walk. Instead of chants through the streets, we were accompanied by birdsong playing from our mobile phones, chosen to represent the 44 million birds who have gone missing from our countryside since 1966. Except, as Chris points out, they haven't 'gone missing' - they, and their habitats, have been destroyed. One of the things to take away from the Manifesto is that the language we use is too passive. The decline of our wildlife isn't just 'loss', it's more profound and active than that. And it needs more profound, joined up and energetic action to reverse what we're doing.

I heard several people say they had never heard a nightingale and didn't know what one sounded like: as a nightingale, unrecognised, played from their own phone speaker. The scale of the loss is huge, and the Manifesto and Walk are a welcome wake up call.

"Replace our silent spring with a raucous summer."
George Monbiot

This is just the beginning. It was wonderful to see the Wildlife Trusts movement represented by people who had travelled from all around the country alongside other charities and organisations including the RSPB, Friends of the Earth, the Woodland Trust, the National Trust and many, many more. We are united in our passion for wildlife and its protection and conservation, and all of us want to end the war on wildlife waged by so many of the pressures of modern life. And I know the Wildlife Trusts will work hard to deliver a Nature Recovery Network, in conjunction and partnership with other organisations as they are already doing with the Greener UK coalition.

Hopefully the People's Walk for Wildlife will act as a wake-up call that ignites more passion, more action and more awareness from government and the wider population. Because we all deserve - and need - a wilder Britain. And it's within all of our powers to demand it, and help make nature's recovery a reality.

Wildlife Gardening for Beginners: The Left-overs

Un-green-fingered Rebecca Neal, Communities and Wildlife Officer, took a website dive into wildlife gardening advice to research for a…