Autumn in the woods

A walk around the wonderful Brampton Wood reminded me how lucky we are to have these amazing wild spaces to enjoy on our doorstep. The autumn sunshine was giving rays of hope as it illuminated the leaves' magnificent golden hues, bountiful fruits were displayed on many trees and the cacophony of birdsong was just magical. The jays were the star performers, sounding like angry parrots, they made a right racket as they squabbled with each other and squirrels for the countless acorns! Both species will take the acorns and bury them in secret stashes around the wood. They will of course forget where they left some, which in turn will ensure the growth of young oak trees within the woodland and beyond.

Another beautiful native tree is the spindle – Euyonemus euraceas - and at this time of year is stunning with its pink/ orange fruits. It's a really good plant for wildlife, and I enjoyed watching a marsh tit hanging about picking at the orange seeds of one of the trees near the entrance path. Listen out for their sneezing ‘pit-choo’ call as you walk around the wood.

The whole experience was truly uplifting and as we get through another lockdown, I felt happy that this incredible place will give many other people the same pleasure in these dark days.

The glorious autumnal colours, or ‘the fall’ as our friends from across the pond say, is one of this season's top wildlife spectacles. But also look out for the incredible starling murmurations, which has to be a top ‘must see’ event in our calendar. Maybe not rivalling the wildebeest migration across the Masai Mara, but in my mind pretty close!

If you haven't seen one, there are a number of places locally on our reserves where this is happening almost every evening. Summer Leys and Titchmarsh in Northants for definite (and many people are sharing their pictures and videos on social media) and also most years at Godmanchester and the Great Fen in Cambridgeshire too.

For my trip I ventured to Summer Leys and the reserve was certainly getting busy with many species of bird including some wintering arrivals, like the 6 red crested pochard spotted by one visitor. Luckily, I chose a clear sunny day with blue skies, although being incredibly windy, felt this might prove difficult for the little birds. However, just after 4pm I started to notice small groups of 20 or so starlings flying randomly around the reserve. I decided to head to the west of the reserve as many were heading in that direction, and as these groups of now 50 to 100 birds flew low overhead you could hear their wing beats fluttering together - quite an exhilarating sound.

Starlings gather in these numbers particularly at this time of year and they like to roost together in large reed beds for protection from predators. From autumn the resident UK populations are joined by many birds migrating from colder parts of the continent which is why we see such large numbers here now. Currently at this reserve, the biggest group gathers in the reedbed just outside the reserve, the other side of the main road, although some birds also roost on the reserve too. I carefully crossed this busy road and found a spot where I could observe safely. The sight that unfolded was truly spectacular. Plumes of starlings in close formation spun around the sky in synchronisation and with each rotation a new smaller group would appear and merge together with the main throng. The wind made it tricky, I’m always amazed that there are no mid-air collisions, but its as if they become one organism and it was totally mesmerising! 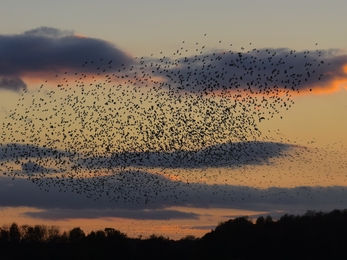 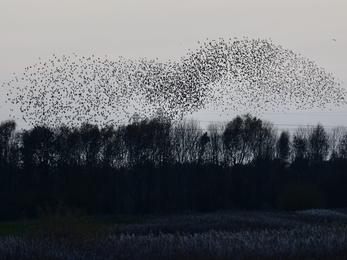 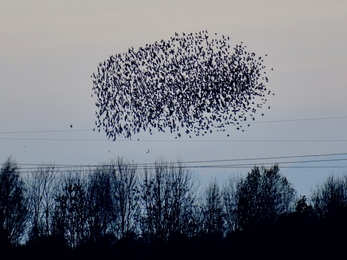 With the sun setting behind, after a good 20 minutes or so they descended on mass at speed into what seemed a single point in the reeds: like watching grains of sand falling through an egg timer. And as they were down, just when you thought it was all over, a large shape appeared quickly with stealth from nowhere and dived low into the descending flock. This was just incredible and I watched in awe as a marsh harrier hunted for its supper. Nature is often cruel, but raptors often target these large groups as there is more chance of picking off the odd bird. Usually you see sparrowhawks waiting in ambush, but to see a majestic, and not so common harrier on the scene capped off a truly remarkable display.

As a wildlife charity, we encourage you to visit our nature reserves, to enjoy them and to appreciate the habitats we’ve created and managed for our native fauna and flora. Please follow all government travel guidelines and social distancing procedures - and you can find our latest visiting guidelines on our website, too.

Our dedicated reserves teams across our 3 counties do a fantastic job keeping these places so amazing. In these difficult times, please consider the value of our work. How special these wild places are to you and everyone else that needs somewhere peaceful to unwind.

If you’re not doing so already, please do become a member and support us - or give the gift of membership this Christmas. These are difficult times for us all, we really do need your help. Average membership is between £5-£10 month, and you get our regular members' magazine as well as member discounts to events - and your support helps us in our vital work looking after the wildlife and wild places of Beds, Cambs and Northants.

Hopefully I’ll see you on one of our reserves soon.

One of our biggest ancient woodlands. Please check for closures before you visit - paths can get very muddy in the autumn and winter!

"Joining your local Trust is one of the most important things you can do to make sure the species and habitats we love will be there for future generations to enjoy."

Farming for the Future - Autumn Update

An update on what's been happening during the autumn months, in the Farming for the Future project