By the time I was 16, I had watched wildlife in many places which no longer existed. My local patch was Thorne and Hatfield Moors, the lowland peat-bogs of south Yorkshire, which were being drained and mined for peat for compost. (Shocking that gardeners are still able to use peat!). If I’d grown up in Cambridgeshire, it might have been ancient woodlands being clear-felled (see Derek Niemann’s moving book, A Tale of Trees: the battle to save Britain’s ancient woodland).  For someone in Northants, perhaps it was flower-rich meadows in the Nene valley being quarried for sand and gravel; in Bedfordshire the expanses of chalk disappearing to make cement. As I assiduously surveyed the plants, birds and insects, and wrote papers for our local natural history journal, a friend described it as ‘writing a rolling obituary for the Moors’. That phrase stuck with me over 40 years.

The good news is that those lowland bogs are now National Nature Reserves; where once there were ancient meadows along the Nene, we now have lakes and meadows, and some of our chalk and limestone quarries are now brilliant places for wildlife. Nature has great resilience and can bounce back after the most horrendous assaults, if we will let it.

1 in 8 species, or over 1 million species, are now seriously threatened with extinction

These local stories carry the same message as the most moving and painful television programme I have ever seen. If you missed Sir David Attenborough’s Extinction: the facts, I beg you to watch it (available on BBC iplayer till August 2022), and encourage anyone else you know to do the same. Bringing together some of the greatest ecologists and economists in the world, the programme pulls no punches. Attenborough, probably the most widely travelled human of all time, and the most trusted public intellectual and communicator, plainly and calmly shows the scale of extinction facing the world  -  one hundred times the natural background rate, 1 in 8 species, or over 1 million species now seriously threatened. He demonstrates the causes, land use change, agricultural intensification, direct exploitation of animal species, and climate change. The destruction is unnecessary: there is enough cultivated land to feed the whole human population, if we prevented 40% of food being wasted, and grew more food for people and less to feed to cattle and chickens.

Two outstanding British economists, Sir Partha Dasgupta (a member of our Wildlife Trust) and Sir Nicholas Stern, spoke clearly and with passion about the necessary changes. Humanity must learn to value nature, we must teach the next generation, and we must use recovery from the Covid-19 recession to tackle the biggest issues. Sometimes, politicians get it:  when they talk of a green recovery, or say ‘build back better’ rather than ‘build, build, build’ there’s a glimmer of hope. Stern points out that investing in renewable energy, better home insulation, and restoration of degraded land, are all labour-intensive activities of lasting value, which would provide valuable work for people at a time of soaring unemployment.

Extinction: the facts is depressing and heart-rending, but it also carries a message of hope and a call to action. Sir David’s final words in the programme are: What happens next is up to every one of us.

The economic impact of the Covid-19 recession may be as great as the depression of the 1930s, but it is far less than that of World War 2. Yet the first post-war government saw the creation of national parks, Sites of Special Scientific Interest and the Nature Conservancy (as well as the NHS, the welfare state and the modern education system). That, to me, is about ‘building back better’.

This time, we have the benefit of hindsight. Despite the most noble intentions, the legislation of the 1945 government did not save the English countryside, nor wildlife, nor did it even give people access to high quality wild spaces close home. 70 years on, we have the chance to get it right.

The work of this Wildlife Trust since its foundation as three separate Naturalists’ Trusts has reflected our growing understanding of the science behind conservation. Our founders protected some of the most important places they knew - the very first, Hayley Wood in Cambridgeshire, is still a magnificent place for wildlife. The Trusts gradually acquired more nature reserves, and worked out that they needed careful management if they were to retain their interest:  meadows ‘protected’ with a fence might not be dug up or built over, but they would change to scrub and eventually to secondary woodland if unmanaged. Then, in the 1990s, as climate heating became undeniable, conservation science made it clear: however well managed they were, isolated nature reserves would gradually lose species. Unless a reserve was connected to other habitats, lost species would never come back. So, we developed the concept of Living Landscapes, and the mantra became Bigger, better and joined up. That remains our approach: landscape scale conservation gives habitats and species the best chance to thrive.

In previous blogs I’ve described some of the new mechanisms which could help us deliver that vision of nature reserves and wildlife sites connected in a vibrant landscape. The forthcoming Environment Act will include ‘Biodiversity Net Gain’, meaning that any development should create or restore more wildlife habitat than it damages, and a proposal for Nature Recovery Networks, which will map the best places to restore woodlands, wetlands, peatlands, chalk grasslands, heathlands and all other habitats. For many habitats, the map almost draws itself: conserve peatlands on peat, chalk grassland on chalk, create wetlands where water gathers. The national commitment to a zero carbon economy by 2050 will not be achieved without applying natural solutions to the problem - using a range of carbon-rich natural habitats, not just the mindless planting of millions of trees. There is abundant evidence that other habitats store carbon as well or better than woodlands, and in the wrong places trees can do more harm than good.

So, let’s gather all the information and all the funding streams together: let the Nature Recovery map show where habitats are appropriate, and several different funding mechanisms can fill in the picture over the coming decades. With the support of local people, we can deliver this: the next 10 years could be the first decade since the 14th century which saw an increase in wildlife habitat (in the 1350s, the Black Death reduced human population by a third, following on a similar catastrophe caused by a decade of appalling cold weather half a century earlier - I’m not advocating that solution this time!).

How much nature is enough?

That takes me to the question in the title: how much nature is enough? Some of the world’s best ecologists have tried to answer it. For E O Wilson, the American entomologist who coined the word ‘biodiversity’ the answer is 50%: he advocates setting aside half the world’s land and seas for nature. An international panel of biodiversity scientists, using the best understanding of how plant and animal populations function, proposed 30% within a decade: that is written into the current iteration of the United Nations Convention on Biological Diversity, and the same goal, of 30% of land and seas to be in restoration for nature, is included in the EU Biodiversity Strategy for 2030.

The Wildlife Trusts are adopting a national target for 30% of land and seas to be in nature recovery by 2030.

So, rather than invent a different figure, the Wildlife Trusts are adopting a national target for 30% of land and seas to be in nature recovery by 2030. It will be a few decades before we, or our successors know if it was an ambitious enough target when faced with mass extinction and global heating. But it has a far better chance than what we have done in the last half century.

There are many ways to look at the 30% figure. It will take longer in some parts of the country than others. In our area, only about 3-4% of the land is ‘protected’ as SSSI, and about the same is designated as Local Wildlife Sites: and not all that 8% is in good condition or suitable management yet. Our local target may be expressed differently at times - working with local authorities and other partners, we have found support for a target of ‘doubling nature’ by 2030. Even if that is closer to 20% than 30% it is an ambitious target for an intensively-farmed and densely populated part of the country. At the other extreme, Cumbria has about 19% SSSI and probably another 10% Local Wildlife Sites, so if those designated areas were well managed, they would have reached 30% already.

Could you make 30% of your garden deliberately wildlife-friendly?

Another way of approaching the figure is to look at different sorts of land.  Could you make 30% of your garden deliberately wildlife-friendly (if it isn’t already)? I’d hope the whole garden was, but 30% would be a good start for many people.  Could councils manage 30% of parks and public greenspace for nature? Again, I’d rather it were a higher figure, and we’ve shown that managing almost all the greenspace for wildlife can create marvellous places for local people too. Cambourne and Trumpington Meadows spring to mind (and as someone said at a conference recently, Cambourne tends to ‘capture’ people - move there, and families like it enough to stay - and I think the rich blend of woodland, meadows, ponds, lakes and hedges plays a part in that). Could at least 30% of the land in any new development be in restoration for wildlife? Could we find more creative ways of farming so that 30% of farmland was restoring nature, rebuilding soils, storing carbon and reducing pollution on land, in the air and in our rivers?  I think if we look at that wider range of nature benefits, it might be achievable.

So, when you hear the Wildlife Trusts talking about ’30 by 30 ‘ that’s what we mean 30% of the land in recovery for nature by 2030. To kickstart the process, we want to raise at least £30 million nationally in the next year. That won’t be enough to finish the job, but it will be an excellent start. And we won’t be doing this alone -  as Sir David said, what happens next is up to every one of us. 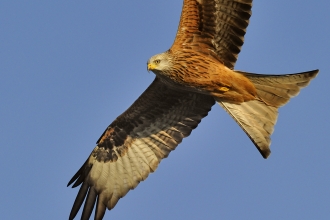 We rely on support from our 34,000 members to protect and restore local wildlife. Will you join us? 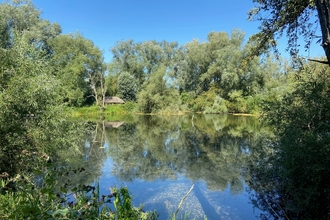 Make a donation to support our vision for a Wilder Future and help us secure 30% of land for nature. 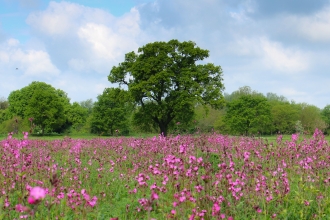 Wildlife in Bedfordshire, Cambridgeshire and Northamptonshire needs your help. Find out what you can do.

The Wildlife Trusts launch an initiative to kickstart nature’s recovery