On the boundary between Luton and Dunstable in Bedfordshire. Rises up to the south of the Guided Busway.

Know before you go

There is no car park for this nature reserve. Please park considerately on neighbouring residential streets. If you park at the Half Moon Lane entrance, please park perpendicular to the kerb.

Grazed with cattle and ponies

Open at all times

The steep chalk hills rising from the edges of Luton and Dunstable have allowed this site to retain grassland full of colour, with areas of scrub providing shelter for birds and insects. The reserve includes a small disused quarry and banks associated with Medieval cultivation terraces. Similar sites have declined nationally and because this reserve is a fine example of this habitat, it is a designated Site of Special Scientific Interest. The views from the top are well worth the climb. The slopes themselves are covered with flower-rich grassland, home to possibly the largest population of great pignut in the county. In spring, orchids dot the hillsides, followed by the late summer hues of wildflowers such as scabious and knapweeds. The steepest banks where the soils are very thin and nutrient-poor are where less competitive, lower-growing herbs can flourish.

These include horseshoe vetch, common rock-rose and kidney vetch, the foodplants of the specialist chalk butterflies chalkhill blue, brown argus and small blue. In spring and autumn, migrant birds stop off at Blow’s Downs to feed before heading off once again on their way to their nesting or wintering grounds. Wheatear, stonechat, whinchat and ring ouzel are among the most notable seasonal visitors. We prevent woodland succession on the grassland by grazing with cattle and ponies, and by removing scrub. To compensate for wildlife habitat lost to the Guided Busway, three acres of land were added to Blow’s Downs nature reserve. The Paddocks, the Hayfield and Chaul End field are all now managed for the benefit of wildlife. We have regular work parties in our North Chilterns Chalk reserves; see our website for details.

FOR ANY MEDIA ENQUIRIES PLEASE CONTACT OUR COMMUNICATIONS TEAM:   communicationsteam@wildlifebcn.org or 01954 713500 and ask for comms team.

Events coming up at Blow's Downs 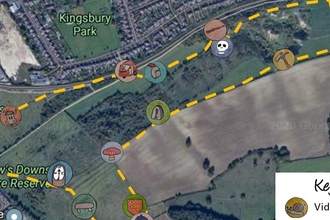 On the boundary between Luton and Dunstable in Bedfordshire. Rises up to the south of the Guided Busway.
More info