A bird hides in the undergrowth by Rosalind Johnston

The importance of citizen science for conservation...

BioBlitzes are citizen science at their best. Over the course of 24 hours, volunteer naturalists armed with hand lenses, sweep nets, moth traps, detectors and identification guides set off exploring two Local Wildlife Sites based on Priors Hall Development in Corby to record all of the species we come across in all taxonomic groups.

In a BioBlitz, we aim to build up a complete snapshot of the fauna and flora found in a site, we invite members of the public to learn skills and techniques used to collect and identify species and we compile all of the records made through this shared effort to create a body of biological data from these sites.

Though certainly a nature lover, I am new to the world of ‘species recording’ so working alongside our expert recorders I focussed on common species. This is the most accessible level to start recording and its importance should not be underestimated. As reported in the State of Nature, 2016 over 50% of all British species are actively declining and 13% are nearing extinction. Some species were previously thought ‘common’ such as the garden tiger moth, bumblebee, and hedgehog. We are all now aware of hedgehog decline in the UK but as the below map of ‘hedgehog records across Northamptonshire from 2015’ shows, low reporting of common species can impact on our ability to recognise and respond to trends. You can see how many gaps there are across the county.

Creating a record, at its most basic level, is made up of what you have seen, where you saw it, when you saw it and who made the record. Checking my map, I chose one grid square SP9390 and I set off to wander writing down any species I recognised. Looking up two buzzards circling started my recording adventure – I added that they were seen in flight. Looking closely across the grassy hill top I noticed a number of ox-eye daisy and buttercups into which a large bumblebee was busy pollinating. Getting close I was able to get a photograph to aid identification of the specific species using my identification guide and checking with our resident invertebrate expert. Travelling down towards the lake, I made a note of a flowering dog rose, St johns wort, brambles and hidden under a felled log pile I spot a red beak and an eye looking back at me. Seconds later, he was off – as startled as I was!

Beside the bank of the lake, in amongst the reed mace, I could hear the sounds of what I thought was reed bunting, tentatively writing this down, I decided to record the sound for later verification. Common blue butterflies and small red damselfles danced above the lake between the rushes as I attempted to photograph a large brown hawker dragonfly. Photographic evidence evading me, I made a note including a description of the dragonfly I had seen. Looking up I caught a glimpse of a heron flying over the woodland edge and I went off in that direction.

My colleague was there looking closely at some stunning purple orchids, new to me, she pointed out the spots of the petals and leaves, telling me they were ‘common spotted orchids’. I photographed them in order to find out more about them back at base camp. It is wonderful to be recording on masse, learning new species and sharing knowledge.

Nearing base camp, I collect a small sample of which I believed to be a wild strawberry, ensuring I had both the fruit head and leaves to aid closer identification. My final stage is to double check my finds against a photo guide, and as I am surrounded by naturalists I take the opportunity to compare finds and hear of the range of species they have found already.

Bioblitzes not only produce thousands of records, they also build recording networks. This citizen science is so important to ensuring an understanding of the state of biodiversity in the UK. 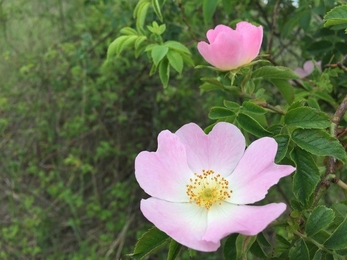 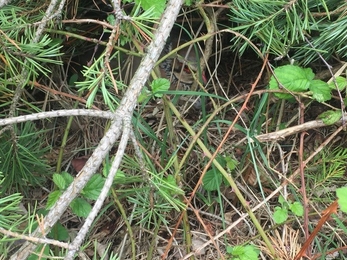 A bird hides in the undergrowth by Rosalind Johnston 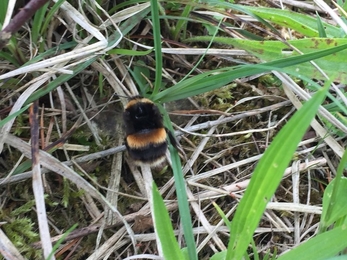 Join a BioBlitz! Events are listed nationally on the BioBlitz website and locally through our WILDside project. I hope you get involved and help us to make a difference!

Find a BioBlitz near you and get recording!

Events during June for 30 Days Wild...

We've got loads going on all through June to help you go wild in our three counties. Visit our calendar for a full list of events.

In one school in Cambridgeshire, 30 Days Wild in June was used as a way to get even more kids looking at the wild world around them,…

There can be a joy to being able to identify species by their sound, but Communities and Wildlife Manager Rebekah extols the virtues of…