How hot is that butterfly?

A guest blogger for the Monitoring and Research team

In the summer of 2018, the University of Cambridge and the Wildlife Trust for Bedfordshire, Cambridgeshire and Northamptonshire began a new project to assess the impacts of climate change on butterfly species living on some of the Trusts’ most important reserves. Butterflies are abundant, easy to survey, and sensitive to environmental change, making them an ideal group to study and understand how individuals and communities might respond to our warming climate.

I had the pleasure of leading this project, setting out with an army of volunteers, staff and students to survey four chalk grassland sites which make up part of the North Chilterns Living Landscape Project: Totternhoe Quarry, Totternhoe Knolls, Blows Downs and Pegsdon Hills. Once per month, from May to September, we conducted whole site surveys at each reserve, recording every single butterfly seen. The aim was to establish an accurate picture of which species were present on the sites, and which habitats they were using. For each individual, we recorded the species, broad habitat type, an estimate of the gradient of the ground, the aspect of the slope (if not flat), and measured the shelter afforded by surrounding vegetation and topography. The summer was a phenomenal one for butterflies, with peak numbers in June and July making the surveys take up to four days per site! However, that all meant that we got a lot of data.

Meanwhile, the Trust’s Head of Monitoring and Research, Josh Hellon, was out with his drone, taking high-resolution aerial images of each reserve. Over the winter, three students in Cambridge will be using these images to identify the availability of each broad habitat type and each topographic aspect on the reserves, and comparing these to the habitat types used by different butterfly species on the surveys. This will tell us about the habitat and topographic preferences of each species of butterfly on the reserves. 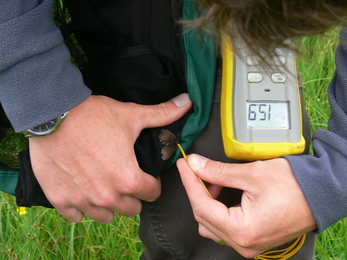 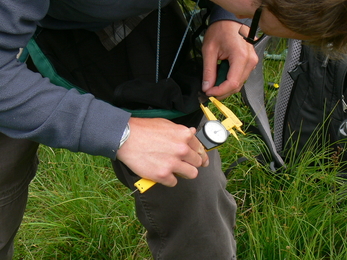 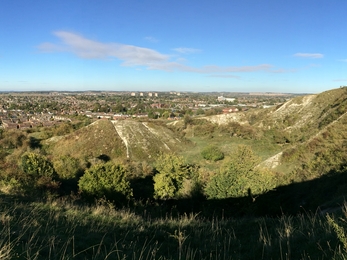 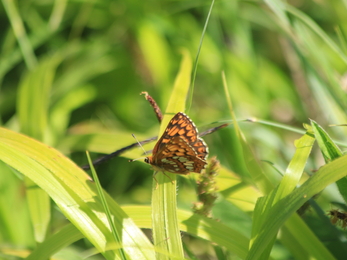 But that is not all. Whilst out surveying in the summer, we were also catching some of the butterflies. When caught in a net, we used a fine temperature probe to carefully take an external body temperature reading, through the holes in the net, followed by the air temperature. What we are interested in is how different species respond to changing air temperatures, throughout the day or season. By how much are they able to raise or lower their body temperature above air temperature, by adjusting their habitat use, activity or wing position? The data suggest that species differ quite a lot in this ability, and this will have important consequences for how species respond to a warming climate. Species which are able to keep themselves cool at higher air temperatures are likely to be less affected by climate change than species which are less able to behaviourally control their body temperature, so it’s useful to be able to predict which species we most need to work to conserve.

But what can we do if a butterfly can’t cope with higher temperatures? Well, that’s the next stage of the research. There is good evidence that vegetation and topographic features cause local changes in temperature patterns – think about sitting on a sunny or shaded slope, on the windward or leeward side of a bush. These are known as microclimates. But whereas a human-sized animal needs a relatively large microclimate to feel an effect, insects such as butterflies might be okay with much smaller ones. So, as well as conducting surveys, we deployed 600 tiny temperature loggers across the four sites throughout the summer, measuring temperatures experienced at 5cm and 50cm above the ground in different habitats and on slopes facing different directions. We hope to use this data to understand how much locations can differ in their temperature patterns, and in 2019 begin to test the effect of different reserve management strategies on fine-scale temperatures experienced. Plus, we’ll be looking in more detail at what affects the ability of individual butterflies to respond to temperature changes, whether their temperature preferences predict their choice of habitat, and whether there are differences between adult butterflies and larval caterpillars. Watch this space….

Dr Andrew Bladon is a Postdoctoral Research Associate at the University Museum of Zoology and Magdalene College, University of Cambridge. His research focusses on the impacts of climate and habitat change on butterflies and birds. He is interested in linking our understanding of broad-scale changes in species’ distributions and abundance to the fine-scale mechanisms which affect individual organisms, with the aim of informing reserve management strategies for biodiversity conservation.

Jake Stone, Placement Intern, tells us about his background and his current intern role in the Monitoring and Research Team at The…

MammalWeb – trapping and spotting wildlife across Bedfordshire, Cambridgeshire and Northamptonshire

Rosalind Johnston, NBRC Manager, tells us about MammalWeb and how you can get involved

Matt Hayes, research assistant at the Cambridge Museum of Zoology, has worked with the Zoology Department's Insect Ecology Research…