A bit of the Himalayas in Cambridgeshire

A guest blogger for the Monitoring and Research team

Himalayan balsam is a very attractive tall annual plant with pink-purple flowers that grows mostly in damp habitats like riverbanks and damp woodlands. Native to the west and central Himalayas,  Himalayan balsam was first introduced to the UK in 1839 and it is now widespread in Britain.

Even though it may look quite appealing to the eye it is classified as a non-native invasive species. Himalayan balsam spreads quickly due to its explosive release of seeds and forms dense stands, which can prevent flow of rainfall and lead to flooding. In the autumn and winter, as the plants die back, it can leave river banks bare of vegetation and vulnerable to erosion. The species also out-competes native species by competing for space, light, nutrients and pollinators such as bumblebees.

In order to stop Himalayan balsam disrupting habitats and altering their ecological balance, the Wildlife Trust BCN organises days out during the summer for volunteers to remove the species from waterways. This has been done for the last 8 years along Bourn Brook from the upstream end to the downstream end of the brook to prevent spreading and work towards eradication. 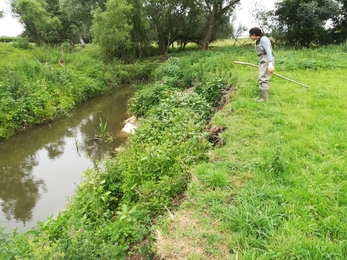 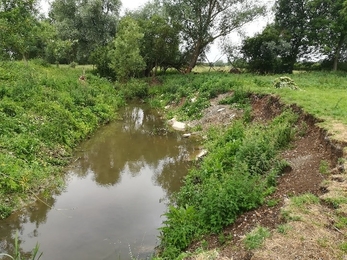 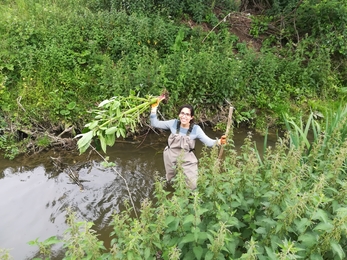 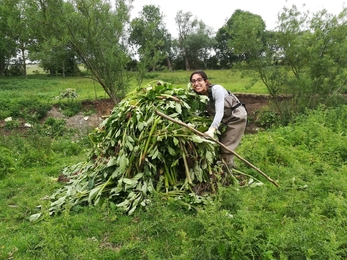 During the last couple of months, I had the chance to help this noble cause and pull some Himalayan balsam. It was a full-on and tiring job, but really satisfying. We saw a whole new area of the river bank being cleared of balsam (See if you can spot the difference in the ‘before vs after’ pictures). I learned how to identify the plant, how to remove it and dispose of it.

Since the balsam was not in flower when I went out, the large oval pointed leaves with a reddish vein in the middle and the fleshy hollow stem were the most striking features which helped me to identify this species. Using a mechanical approach we pulled the plants out of the ground by the root or cut it below the lowest node to stop regeneration. Then we placed it in high branches of trees so it dries out, or in large piles on the riverbank when  there was too much to handle in this way. To get some idea of how much – just take a look at the photo!

Rosalind Johnston, NBRC Manager, explains a new project which will put the ponds in Northamptonshire on the map and how you can help.…

The State of Nature in the BCN Area

Meet the Volunteer: combining volunteering and photography on the North Chilterns Chalk