We are working to manage the site at Felmersham for all species. Josh Hellon (Monitoring & Research Manager) tells us more.

A visit to the crystal clear waters of Felmersham Gravel Pits in the summer is a very rewarding experience. Since gravel extraction stopped in the 1940s, the site has developed into shallow finger lakes surrounded by woodland and flower-rich grassland. On a single visit, you can easily spot more than ten species of dragonfly and damselfly; 23 separate species were recorded during surveys in 2018.

If you sit on the banks and look under the water, you may see some interesting plant species. The site is one of the few of our reserves where you can see the locally rare whorled water-milfoil Myriophyllum verticillatum and bladderwort Utricularia australis. Milfoil is an attractive submerged plant with feather-like leaves; this species has disappeared from a number of former sites due to decreases in water quality and habitat destruction. Bladderwort is a fascinating carnivorous plant, with tiny bladders that allow it to ingest small invertebrates. This species has also declined in lowland England and is considered particularly sensitive to competition from other submerged plant species. 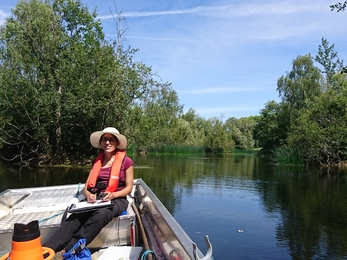 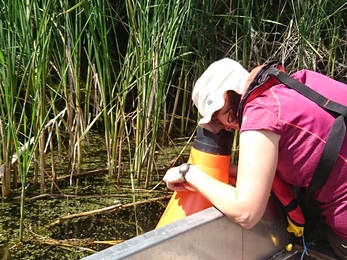 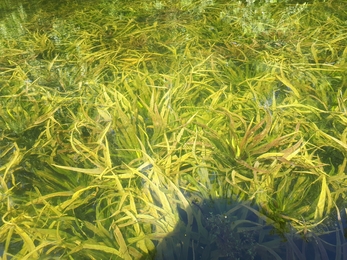 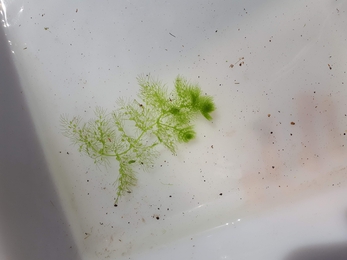 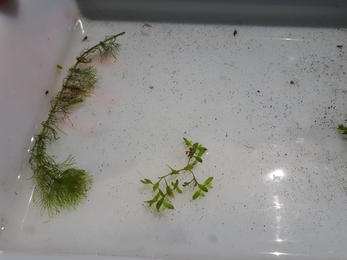 A relatively recent introduction to the aquatic vegetation at the site is a species called water soldier Stratiotes aloides. If you have visited in late summer, you may have seen the pointy, pineapple-like leaves of this species sticking out of the water. The plant spends most of the year as a submerged rosette, but it may float to the surface to flower between June/August. This species is considered native to the UK (although it is possible that it was introduced at some point) and is rare and declining in its native UK range. However, it is a common garden plant and has regularly ’escaped’ into other ponds and lakes. This is the situation at Felmersham, and unfortunately, the plant has turned out to be something of a bully. The environmental conditions appear to be ideal for the species and it has rapidly spread to fill an entire area of the lakes.

There are concerns that the spread of fast-growing water soldier may be having an adverse impact on the other species at the site – particularly the milfoil and bladderwort that struggle to compete for space and light. However, it is important to note that water soldier has benefits of its own. The plant provides a great habitat for aquatic invertebrates, including the larvae of damselflies and dragonflies that are abundant at Felmersham. Notably the rare Norfolk Hawker Aeshna isosceles dragonfly that is strongly associated with water soldier sites has recently been recorded at the site.

Assisted by Natural England and an army of volunteers, we have endeavoured to control the spread of water soldier at the site whilst maintaining favourable conditions for all species. This has led to a management plan where floating water soldier plants are removed annually, but will now be left untouched in one corner of the lake. In addition, we have put in place controls to stop the water soldier spreading further around the site.

As a Trust, it is very important that our work is backed up by good science. To this end, we have set up monitoring of the aquatic plants, aquatic invertebrates and adult dragonflies/damselflies at the site. Our expert volunteers, Natural England and University College London (UCL) have been indispensable in assisting with the surveys and providing advice. The aim of these surveys is to monitor the impact of our management at the site. Whilst we hope to see positive trends for species, it is equally important that we pick up any possible negative impacts of the work, and adjust our management as needed.

At the end of July we spent 2 (very warm) days in a boat surveying the aquatic plants at the site, and were very pleased to record bladderwort in places where it was thought to have disappeared. Use of a bathyscope (underwater viewer) allows you to see an amazing world beneath the surface and conduct an accurate survey of the plants. Again, this work would not have been possible without our volunteer interns (see other recent blogs) and help from UCL.

I fully recommend anyone who lives nearby to pay a visit to Felmersham and see why we are all working hard to protect this site for the future.

On the Watch for Water Bugs

Juliette Butler explains how you can learn how to identify water bugs in your garden pond, or local waterways

On the hunt for hoverflies

We'll be live on Twitter at 5.30am on Sunday 3 May. Practice your birdsong ID and get involved!