As the summer sun sets, the countryside comes to life.

As the summer sun sets, the countryside comes to life. If you look closely you may be lucky enough to glimpse into the world of a glow-worm.

Our glow-worms, Lampyris noctiluca, are in the same family as fireflies but behave very differently. They are actually beetles, not worms, and the males could easily be dismissed as just another small black beetle. The females however are where it gets really interesting - unlike other beetles they don't have wings so are unable to fly. This makes finding a mate very slow going, so the females produce a bright green light from their abdomen to advertise themselves and attract a male. The males fly around looking for these lights from June to September, which is the main breeding season.

Glowing and flying use up a huge amount of energy so glow-worms are very particular about when to seek a mate: for example they tend not to try in windy or wet weather. The females glow just after dark but if they haven't attracted a mate in a couple of hours they will turn off their light and wait for the next night. These decisions in saving energy are even more important when you consider that an adult glow-worm can't eat. As a larva, the glow-worm is a vicious predator of slugs and snails and hunts them by following their trails. But once the glow-worm is an adult, its sole purpose is to find a mate. 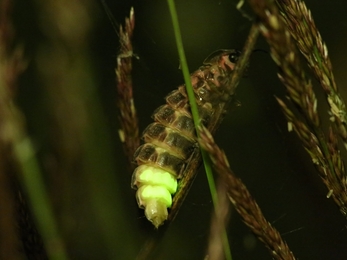 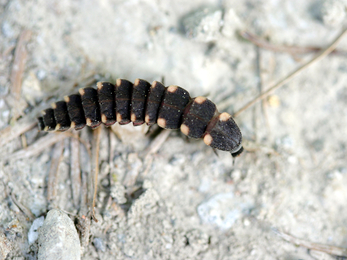 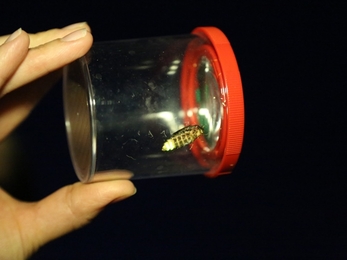 Unsurprisingly, due to these short glowing times and otherwise inconspicuous nature of these beetles, recorded sightings of glow-worms are uncommon. We are lucky enough, however, to look after some key sites for them in our area and there are a few events coming up in our calendar where you can come and see glow-worms for yourself.

To learn more about glow-worms in your area, you can check the latest sightings here - www.glowworms.org.uk. Please do let your local records centre know about any glow-worms you see this summer. It's really important that we try and keep tabs on these amazing beetles, so we can track and measure their conservation.

And don't forget to enjoy these night-time creatures, as well as all our other amazing wildlife that comes out when the sun goes down.

Hunt for night-time creatures. It's not all about bats and badgers - there are plenty of other creatures out and about at night. Why not go on a night-time hunt in your own garden and see what comes out when the sun goes down?

One of the most exciting things about 30 Days Wild is that it challenges you to look for nature everywhere.

30 Days Wild 2021: inspiration and activities for your Random Acts of Wildness

30 Days Wild 2021 is here! We will be updating this blog daily with new activities to inspire your Random Acts of Wildness.