Farming for the Future project coordinator Helena Darragh has been preparing for the arrival of the only rotary ditcher in the UK for a while...

If you had asked me six months ago to describe a rotary ditcher I’d have given you a very puzzled look. Now, I reckon, I could probably bore you to sleep with the amount of stuff I could spew out about the RSPB’s rotary ditcher (which I’m now going to affectionately call RD), the only machine of its kind in the UK.

Contracted out by RC Baker Ltd., we booked RD to make a special trip to the Nene Valley for a couple of weeks in August, visiting six different sites, managed by seven different landowners to create seven kilometres of ditches, providing tens of thousands of square metres of wetland habitat across the Nene Valley - a veritable Nature Recovery Network.

The aim of this work has been to create a series of shallow ditches and scrapes, enabling water to be retained on land beyond the winter months, providing new nesting and breeding spaces primarily for overwintering and breeding waders such as lapwing, snipe, redshank and curlew. Of course, with this new wetland habitat a whole host of other species of fauna and flora will also establish.

The roots of this work can be traced right back to 2002, when a number of sites in Northamptonshire were identified as potential sites for wetland restoration. As part of the Farming for the Future project that I am running as part of the Nenescape Landscape Partnership Scheme, grant funding has been made available through the National Lottery Heritage Fund for conservation work with farmers and landowners. This presented us with a fantastic opportunity to make a coordinated effort to create a series of wetland features across these sites.

The site furthest from the River Nene is at a distance of just 600 metres, and as such, all are regularly affected by, or inundated with water, particularly when the river is in peak flow. Early this year, contact was made with the relevant owners of each site, follow-up visits planned with interested landowners and, just like that, we had project RD up and running.

Using LIDAR data, freely available online from the Environment Agency, the land levels of selected sites were analysed and plans made for the wet features based on the lowest points, where water naturally pools before percolating through to the water table or evaporating.

As ever with technology, a couple of the sites had rather patchy data, leaving some wonderful gaping holes in the fields, pretty much exactly where we’d be looking to put our features. So, self-taught, we ventured out into the real world with the levelling kit and took readings ourselves which informed us f the field ‘flatness’. One thing I would say about this exercise is that if a field looks as flat as a pancake, it probably isn’t.

We then designed the paths of the ditches based on this data, playing a great game of dot-to-dot to connect the lowest points in the field together, which produced some very complicated and official looking maps (which meant that for the most part, people in the Lings office assumed I was looking at some fungus through a microscope).

Ditches were designed with future land management in mind, ensuring that farmers could continue to farm their fields and move machinery in between or across the ditches. With the maps complete (along with all the other not so fun documentation), we were ready to go. 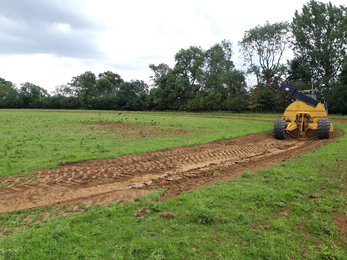 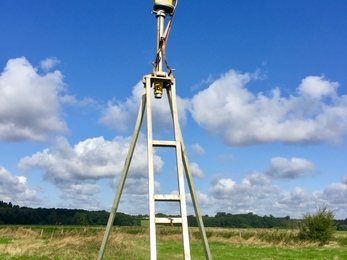 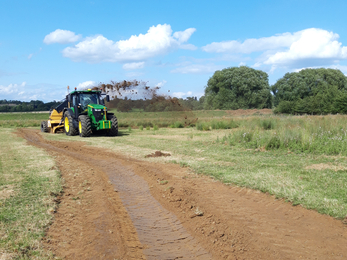 August. As RD rolls up onto the first site in Northampton; an ambling, creaking, whirring object, it seems so contradictory that a machine so cumbersome has the precision of just a couple of centimetres. There is a real sense of occasion as it shudders to a halt beside a small marker peg hammered into the ground a few days before, awaiting orders.

RD works using laser levelling. A tall tripod is set up in a corner of the field, which emits a signal to RD telling it the level at which the ground sits. Having chosen the ditch level, all that remains is to get into position, flick the switch and start the wheel turning.

Soil is removed at minimum increments of 2.5cm, whizzed round the wheel and flung at incredible speed out from the spout to the left, up to a distance of 40 metres. The whole movement is pretty impressive, looks rather violent and gave me worrying flashbacks to the days when slurry gushed out of the backs of tractors at alarming rates over fields. Thankfully, this spoil is just topsoil, spread thin enough over the surrounding ground to allow the vegetation to grow back through in a matter of weeks.

Though suffering a small fracture on the second day, and getting rather stuck in a ditch we had in fact created (laughable with hindsight), RD put on a sterling performance, finishing ahead of schedule and beating the torrential rain forecast towards the end of the second week. It was an absolute joy to watch the ditches become reality, as RD delicately carved out grooves in the damp ground, water already creeping along the bases of the ditches in some cases. Knowing we’d left a site ultimately better for wildlife than we’d found it, despite the somewhat scruffy appearance of earth spread out across the field, gave us all a real sense of achievement.

Now, back in the office, with the hype from an ITV West Anglia feature now subdued (!!), all that is left to do is keep our fingers crossed for a wet winter (at least we have something to smile about on those miserable days) that will fill up our ditches and scrapes, transforming the current muddy, soily fields in small havens for wading birds across the county.

Farming for the Future

New Habitat in the Nene Valley

Farming for the Future - Autumn Update

An update on what's been happening during the autumn months, in the Farming for the Future project