A good century for slugs

Exploring the many species of slug which have arrived, or become much more abundant and widespread, in Britain in the last century.

“Invasion of the giant cannibal Scandinavian slugs: Cambridge gardens under siege from unstoppable monster molluscs” - so said the Cambridge News in September 2014. The truth is slightly less horrific, but still pretty dramatic.

The slug in question, Arion vulgaris, variously known as the Lusitanian, Vulgar or Spanish Slug (and now, Scandinavian Slug!), has been in Britain for at least 50 years, it’s no larger than several other species, it’s no more prone to cannibalism than our native slugs (of which, more later), it’s from the Mediterranean not Scandinavia, and it’s had a good year but is probably no more a threat to gardens than several much smaller species. This species and its relatives have an annual life cycle, breeding in summer and autumn then dying off. Newly hatched youngsters are sensitive to frosts and to drying out - so a mild winter and a wet summer are good for them. They are hermaphrodites, and each can lay up to 400 eggs, so they can build up large populations quickly.

This is one of many species of slug which have arrived, or become much more abundant and widespread in Britain in the last century. When, as a student, I helped write the standard guide to slugs back in 1983, we included 30 species. The latest guide published this year, has 43. I can’t think of any other group of plants or animals which has changed so much in 30 years.

The slug which first captured my interest was the Durham Slug. In my first week at university, on my first visit to the science library, the first journal I took off the shelf was the Bulletin of the British Museum. It fell open at a paper which referred to a slug new to Britain from 24 North Bailey Durham. At the time, I was living about 6 doors away! I spent quite a few evenings in my three years there studying this attractive and variable species, which was little-known and didn’t even have a valid scientific name at the time. We now know that it was first recognised in southern Ireland in 1893, then forgotten for 60 years till it turned up in Durham. I didn’t see the Durham Slug in central England till the 2000s, but in recent years I’ve found it at Flitwick Moor, Harlestone Firs and last year, at Cambourne (with its bigger ‘Scandinavian’ relatives). 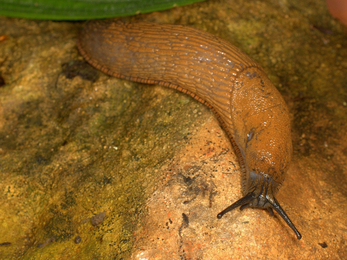 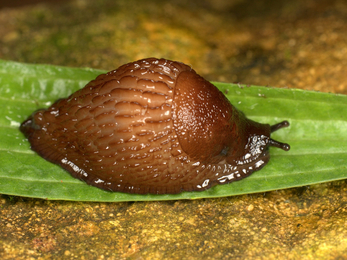 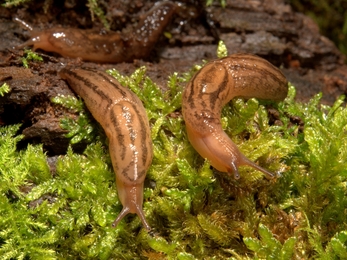 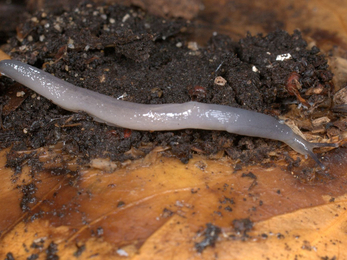 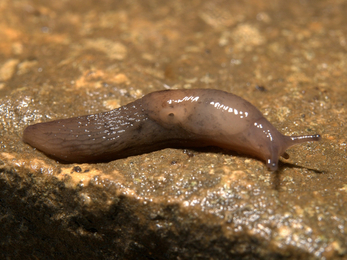 For such famously slow-moving animals, slugs are remarkably good travellers. The slug most likely to make holes in your potatoes is the Budapest Slug, which was first seen in Britain in the 1930s. As its name suggests, it’s originally from eastern Europe, but is now ubiquitous. Another familiar garden animal, the Chestnut Slug, likewise arrived in the pre-war years and is now common, in wild habitats as well as gardens, throughout the country. Most of its close relatives come from Mediterranean islands - I’ve seen a similar species in Cyprus - but the natural range of the Chestnut Slug is unknown, although it has spread globally, hence its scientific name of Deroceras invadens. Small and brown, it is quite an active and occasionally aggressive beast, described in one field guide, as “lashing its tail from side to side, and snapping at other slugs”.

One of the weirdest and least obtrusive species, the Worm Slug, spread from the Caucasus since the 1920s, and wasn’t seen here till 1972. Within a decade had been seen on islands off Ireland, on loch shores in Scotland, and halfway up Snowdon. It spends much of its time underground, and is believed to feed on soil fungi and small invertebrates. It turned up in the garden of the Wildlife Trust’s offices in Cambourne this year.

Most slugs do well because gardeners and horticulturalists move them and their eggs around. Another news-worthy slug, a small, stripey pink species called the Spanish or Greenhouse Slug, is available free from most garden centres - buy a pot plant, and if you’re lucky, find your free slug in the bottom of the pot. It’s been in Britain for at least 80 years, but it was confined to heated greenhouses till the 1980s. It gradually spread to gardens in the southern half of England, and a couple of years ago I found it living in the wild, under logs in Oaks Wood in Cambourne.

One of my favourite slugs which has done very well in recent years is the so-called Irish Yellow Slug. It’s yellow and green marbled (each slug with a different pattern, so you can get to know individuals), with lovely blue tentacles. In Britain, it lives in gardens and around downs, browsing on lichens and algae on walls - like most slugs, it doesn’t generally eat living green plants. In Ireland, it’s also found in woodlands, and looks like a long established native. But it’s actually thought to come from the Crimea, and to have been introduced into Ireland and then into Britain. It’s first local record was on old walls in Huntingdon, around the house in which Oliver Cromwell was born.. I like to imagine that its eggs were brought to Britain on Cromwell’s boots. That’s maybe not as far-fetched as it sounds - another Irish species, not known from mainland Europe, turned up in a village in County Durham when I was a student there; it turns out to be the village where the Irish navvies settled after building the railways. It was still there in 2012.

And finally... the question of cannibalism. There are very few observations of slugs eating each other in the wild. When over-crowded in captivity, the Chestnut Slug may occasionally kill smaller slugs. Quite a few species nibble each other while mating, and late in the season, they can look rather worse for wear. Producing a large batch of eggs is hard work, and needs lots of protein, so, in the weeks leading up to the breeding season, many slugs look for more nutritious food. Rather gruesomely, this will include any dead slugs or snails which they encounter. And sadly, many molluscs are trodden on at night, accidentally or deliberately, and slugs’ scavenging may give rise the accusations of cannibalism. Another side effect of their new appetite is that urban slugs spend their summers and autumns tidying up after dogs, clearing our pavements of the mess their owners should have binned. So, even if you don’t appreciate slugs for their own sake, perhaps you can admire their successful lifestyle and their help in keeping our streets clean.

If anyone would like to try identifying the slugs in their garden, and don’t want to buy the brilliant key from the Field Studies Council, a guide to the local species, is available from our ecology resources section.

Walking in solidarity with the youth strike for climate activists

Damning reports, citizens' demands and public shock and outrage is bringing the need to act on behalf of our environment into the…